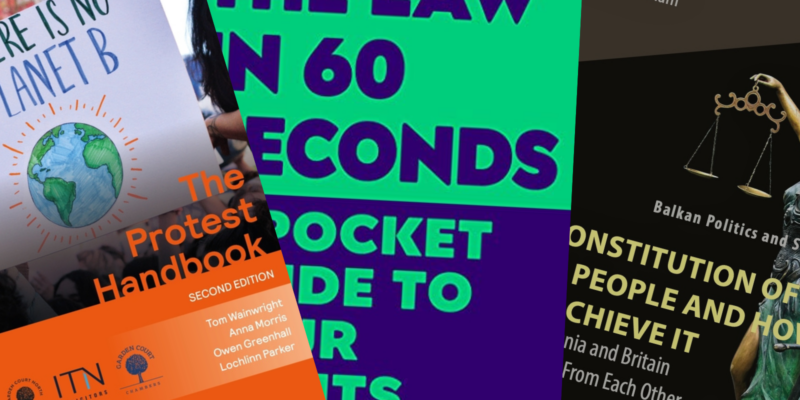 This World Book Day we are celebrating the contributions to the world’s bookshelves by our very own members.

Barristers at Garden Court North Chambers have seen highly acclaimed and well received publications in recent years. Aarif Abraham and Christian Weaver have both had books published since the last World Book Day and Anna Morris has had great success with The Protest Handbook which she co-authored, and which was published in 2020.

Christian’s book, The Law in 60 Seconds: A Pocket Guide to Your Rights, achieved top spot in Practical law guides chart on Amazon, with the Kindle edition. Described as “pioneering legal advice” by The Guardian, and “An indispensable guide to the law and your rights…” by fellow bestselling author/barrister, The Secret Barrister. The Law in 60 Seconds is a brief everyday legal resource.

Aarif’s book, A Constitution of the People And How to Achieve It, is about how people can decide to be governed better. It considers the processes behind the making of two constitutions at the opposite ends of a spectrum, Britain and Bosnia; and the lessons that can be learnt for constitution-making generally. It received highly complementary reviews from academics, barristers, and silks. A review which resonates particularly strongly, at the time of writing, is that from Margaret Owen OBE, who wrote: “The publication of Aarif Abraham’s book, in these troubled days, could not be more timely as we witness authoritarian regimes ignoring or rewriting their codified constitutions by obliterating the rule of law on which they purport to be based.”

The Protest Handbook, which does exactly what it says on the ‘tin’, is now in it’s second edition and was described as by Green Party MP, and prominent campaigner, Caroline Lucas, as: “a clear and accessible guide to protest law, which brings together both the criminal and civil aspects of this area of law and explains complex legal issues in a user-friendly format.”

Alongside her contribution to The Protest Handbook, Anna is also the Human Rights editor of Stone’s Justices’ Manual.

Natalie Wilkins is also a regular contributor to legal texts including Patterson & Karim on Judicial Review and Macdonald’s Law and Practice.