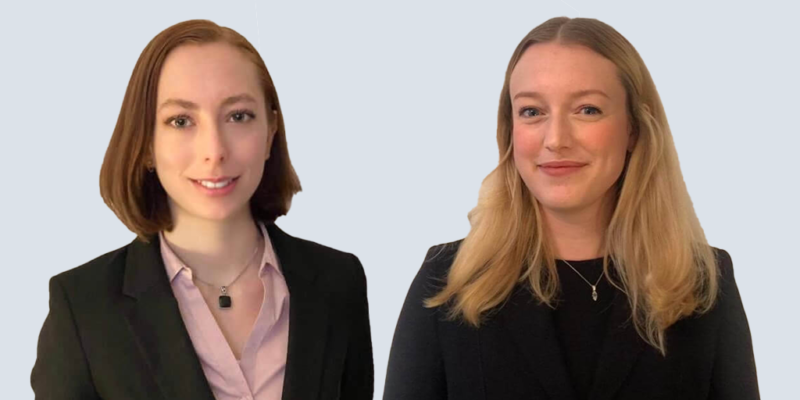 We are delighted to announce that Pupils, Rosalind Burgin and Lily Lewis will commence the practising period of their Pupillage on Wednesday 8 September 2021.

During their first six months, Rosalind and Lily have worked closely with their Pupil Supervisors, Clare Ashcroft  and Gary Willock together with members of Chambers across our core practice areas.

During her first six, Rosalind has been working with GCN’s criminal defence & appeals team where she has built on her previous experience with protest cases, and with vulnerable clients. She has also gained experience in the representation of youths in the Crown Court, building expertise in the complexities and priorities regarding youth justice, particularly the sentencing of young people. This is something that Rosalind hopes to build upon in her second six.

Rosalind also has a particular interest in housing, welfare benefits and public law, having worked at the Greater Manchester Law Centre and on human rights claims against the DWP at Leigh Day solicitors before commencing pupillage.

At GCN she has been able to grow this expertise by working with members of GCN’s housing team on possession claims across the North West, and on welfare-related public law challenges at the Upper Tribunal. Rosalind spent an extended period with GCN’s immigration team, assisting and observing hearings for asylum, EEA and deportation cases and she is keen to accept instructions across these areas.

In her first six Lily gained experience in chambers’ core practice areas, including housing, inquests and inquiries, immigration, public law and crime. She is particularly interested in cases involving policy issues, Equality Act 2010 and public law arguments and challenges to structural failings by state bodies. She is committed to working directly with clients at an early stage and particularly understands the benefits of conferences with individuals with mental health difficulties and other vulnerabilities.

She worked on cases across the full spectrum of housing and homelessness law, including possession, homelessness appeals, claims for unlawful eviction and housing disrepair, committal and injunction applications. She has considerable experience of directions hearings and other procedural matters. Lily appreciates the importance of proactive case management, particularly the need to organise and plan possession cases from the initial hearing.

Lily has observed Article 2 and non-Article 2 inquests and is developing expertise in prison custody, police detention mental healthcare contexts. She has experience of detailed analysis and research of Article 2 systems failures by community mental health services.

She also gained experience across a range of public law matters, including drafting grounds for judicial review and assisting with CG v Department for Communities (C-709/20) and Fratila v Secretary of State for Work and Pensions.

She observed and assisted with a range of immigration and asylum law cases at both the First and Upper-Tier Tribunal as well as judicial reviews of age assessment decisions by local authorities and National Referral Mechanism decisions. She has been trained as a Duty Advocate at the Asylum Support Tribunal.

We look forward to introducing Rosalind and Lily to Chambers’ professional clients during the next six months and we wish them every success in the next period of their Pupillage.

If you would like to discuss instructions, please do not hesitate to contact a member of the Practice Management Team.