OUT-LINES Webinar on the ‘Crime of Crimes’: Personal and Legal Reflections on Genocide On 4 November 2020, Garden Court North Chambers (GCN), in association with the University of Manchester and Accountability Unit, will launch its ‘OUT-LINES’ seminar series on international law.

This year marks the 75th anniversary of the liberation of Auschwitz and the 25th anniversary commemorating the genocide of Bosnian Muslims in Srebrenica, Bosnia-Herzegovina. Genocide in Srebrenica was the worst atrocity on European soil since the Holocaust despite States’ commitments to ‘Never Again’. In the first of a series on international law, we explore what genocide means from both a personal and legal perspective.

Pete Weatherby QC will Chair the event and help frame the discussion. [5 mins] Prof Javaid Rehman, Member of the Coordination Committee of the Special Procedures United Nations Human Rights Office and Associate Member of GCN, will deliver the keynote speech on why this discussion today is as relevant today as it was after the horrors of WWII. [10 mins] Dr Noemie Lopian and Dr Leyla Ferman will relate their own personal legacies of living with the consequences of genocide: one historical relating to the Holocaust; [15 mins] the other contemporary relating to crimes against the Yazidis of Iraq and Syria. [15 mins] Aarif Abraham will talk about the law relating to genocide and the difficulty of its application. [10 mins] Kate Stone will conclude by speaking about the lessons we can learn for the future from both the legal and personal perspectives. [10 mins] Our host will be Dr John Haskell who will introduce the event and tell us more about each of the contributing organisations. [5 mins] Discussion with audience members will follow. [45 mins] 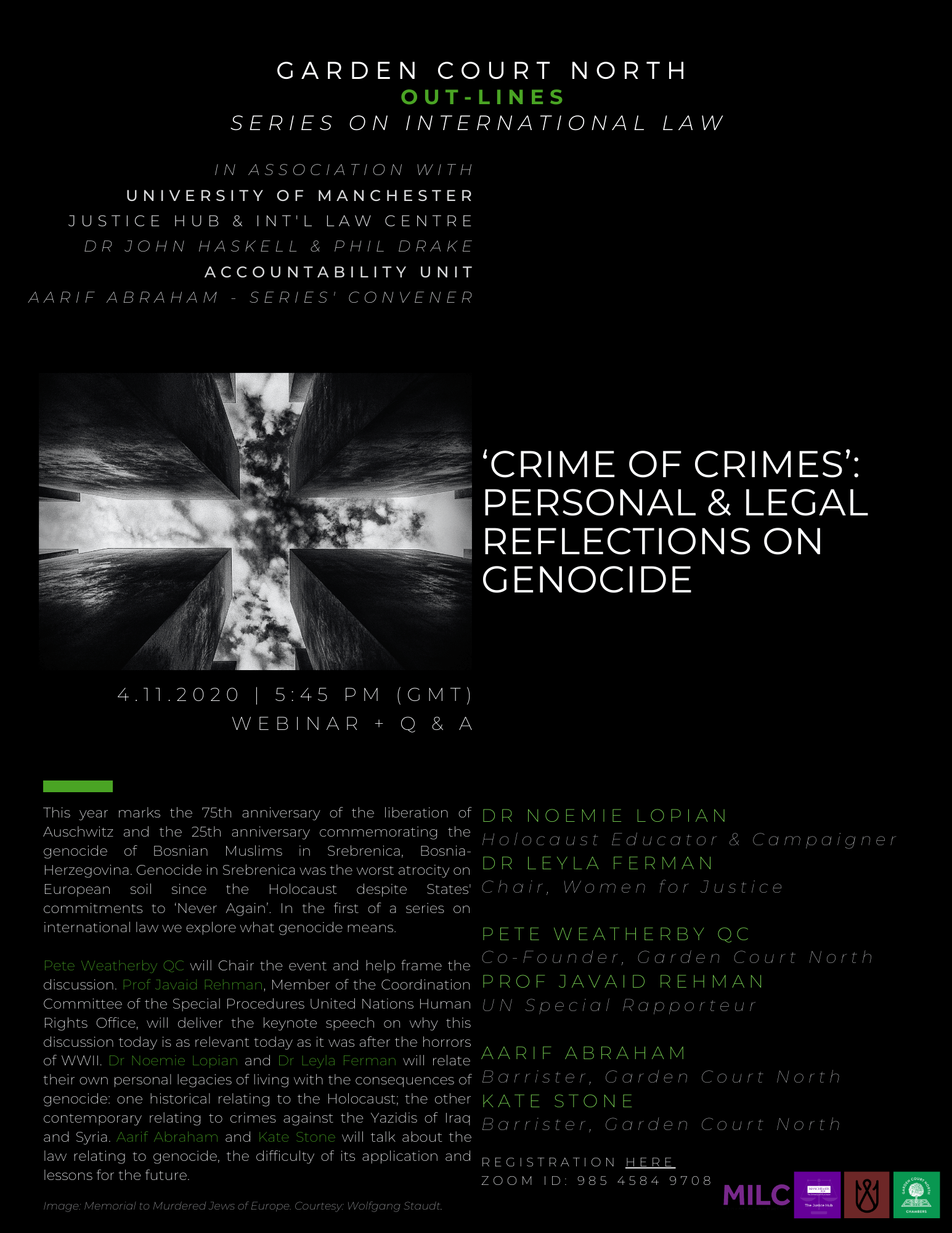 Professor Javaid Rehman – Javaid is a Professor of Law at Brunel University, London, United Kingdom and the current United Nations Special Rapporteur on the Human Rights Situation in Iran. He is a Member of the Coordination Committee of the Special Procedures United Nations Human Rights Office. Javaid possesses over 25 years of experience as an academic lawyer and is one of the leading global authorities on the subject of Muslim constitutionalism and international human rights law.

Pete Weatherby QC – Pete is a barrister specialising in cases involving miscarriages of justice, freedom of expression, extradition, ‘terrorism’ and widely on violations of international human rights and criminal law. Pete has advised ministers and shadow ministers regarding a number of high-profile cases and is a regular commentator on legal and human rights issues in the media. Pete was a founding member of Garden Court North Chambers. He is a member of the Executive Board of the Bar Human Rights Committee and is a Trustee of INQUEST.

Dr Noemie Lopian – Noemie trained to be a GP. Whilst on maternity leave with her youngest daughter, she read “Die Lange Nacht”, her father’s, Dr Ernst Israel Bornstein’s, experiences in seven labour and concentration camps over four and a half years in Poland and Germany. She translated her father’s biography, over 3 years, and “The Long Night” was launched in the House of Lords in 2017. Her mother, Renee Bornstein only recently shared her story. As a child, aged 10, Renee grew up in France and was questioned at gunpoint by Gestapo. (My Family, Me and The Holocaust, BBC 1, May 2019). Since then Noemie has become increasingly involved in Holocaust education and commemoration and, in particular, emphasising its relevance today.

Dr Leyla Ferman – Leyla is the Chair of Women for Justice which is an international women’s organisation based in Germany who wish to raise awareness of what happened to the Yazidi and also the disproportionate impact this had on women and girls. They have collected witness testimonies from women survivors that have fed into a number of NGO and UN-led initiatives considering legal accountability for genocide of the Yazidi people in Iraq and Syria. Dr. Ferman was born in Germany, into a Ezidi/Kurdish family.

Kate Stone – Barrister specialising in human rights and public law, with an emphasis on inquests, judicial review and civil actions against public authorities. She is an Executive Member of the Bar Human Rights Committee and regularly undertakes advisory and drafting work in public international law and previously advised on matters relating to international criminal law.

Dr John D. Haskell – Currently a senior lecturer at the University of Manchester Law School and junior faculty at the Institute for Global Law and Policy (IGLP, Harvard Law School). Prior to Manchester, a Fulbright Scholar and held tenure track academic appointments in UK and US law schools. When not working, he enjoys being a dad and negotiating entropy.

Aarif Abraham – Aarif is barrister specialising in public international law, international human rights law, and international criminal law. Aarif is rostered as an expert by a number of United Nations bodies and has worked on a number of cases relating to mass atrocity crimes. He is regularly instructed by IOs, NGOs, parliamentarians and individuals in relation to violations of rights and commission of crimes during armed conflict and, in particular, cases relating to the crime of genocide. Aarif frequently writes, lectures and advises on issues related to foreign policy and international affairs.