The Miner and the Police Officer – why a photograph matters 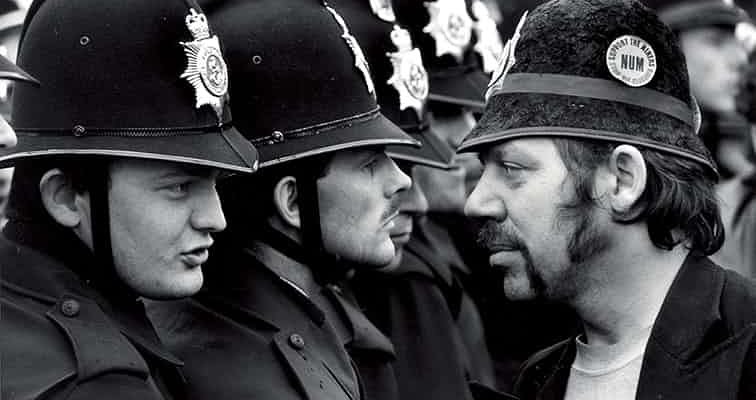 On arrival at Garden Court North Chambers visitors can see one of the iconic images from the Great Miners’ Strike of 1984-5. It is an image that has been seen around the globe, a brilliant photograph by Don McPhee. It depicts a miner, George Brealey from Yorkshire Main colliery, with prominent sideburns wearing a toy police helmet talking to a police officer in the massed ranks of police officers at the Orgreave coking plant near Sheffield in June 1984. Mr Brealey, affectionately known to his friends as “Geordie” was also well known as someone who liked a laugh and as a former soldier he had pretended to be reviewing the police officers on parade. Sadly Mr Brealey died in 1997.

As a brand new barrister I cut my teeth on public order cases. In the autumn of 1977 I was instructed in a large number of cases that arose from the determined efforts of local residents and anti-racists to halt a march by the fascist National Front through the streets of Lewisham the previous summer. Doing a series of trials for threatening behaviour, obstructing and assaulting police officers was the best advocacy training a new barrister could ask for.

When the miners’ strike broke out in early 1984 I was one of a number of barristers organised by the Haldane Society to spend a week at a time in Ollerton in Nottinghamshire. Large numbers of miners had been made subject to highly restrictive bail conditions, some of which made it all but impossible for them to continue to live in their own homes. I saw for myself the reality of what was in effect a police occupation of Ollerton as well as a number of other pit villages. On one occasion when returning with my client and a mate of his from the Magistrates’ Court in Worksop we were stopped at a police roadblock and required to explain and justify our presence in the area.

Since those days I have represented scores of demonstrators or pickets on strike – from the miner’s strike, to the fight to prevent the loss of print jobs at Warrington a few years later, as well as Greenpeace activists who blocked the outflow pipe of a chemical plant discharging unlawfully into the Irish Sea, and others who bolted themselves to the road to prevent the movement of nuclear waste. In more recent times barristers in the Crime Team at Garden Court North Chambers have been involved in many public order cases, including currently assisting dozens of those arrested in anti-fracking protests.

We decided that it would be fitting for a chambers like Garden Court North Chambers, with our ethos of support for the individual facing the power of the state, to have a copy of the photo on display and to use it on our Crime Team’s website page. The image has always resonated with me on a number of levels. It depicts bitter rivals sharing a moment of light-heartedness, but it also depicts the raw power of the state in the form of mass-ranks of police officers pitched against a hopelessly under-equipped opponent whose only interest was in preserving jobs that most people wouldn’t have dreamed of taking even as a last resort. But most of all for me it stands as a reminder of a terrible defeat for the working class. Although we didn’t know it at the time the miners strike, more than 30 years ago, was the last large scale industrial dispute in the UK. Since then we have seen wages stagnate for large numbers of workers, along with an assault on terms and conditions and increasingly insecure employment most obviously exemplified by zero hours contracts. All these things can be traced back to the defeat of the miners and the ensuing powerlessness of trade unions who never recovered from that defeat.

Doing public order cases always involves the interface between, on the one hand the overwhelming power of the state with a police force which can, as we saw in the miners’ strike, easily be transformed into a para-military force with full backing of the government of the day, and on the other hand the right to protest and the right to a fair trial. Anyone who has ever tried a public order case in the Magistrates’ Court knows only too well how heavily the odds are stacked against those accused of offences and how hard it is to ensure that your client gets even a semblance of a fair hearing. Whenever I see that image, or as I write this now have it in my mind, it makes me smile but it also strengthens my resolve to do all I can for the clients I represent who, like George Brealey, are standing up for what they believe in.

Mark George QC is a barrister and Head of Chambers at Garden Court North Chambers.