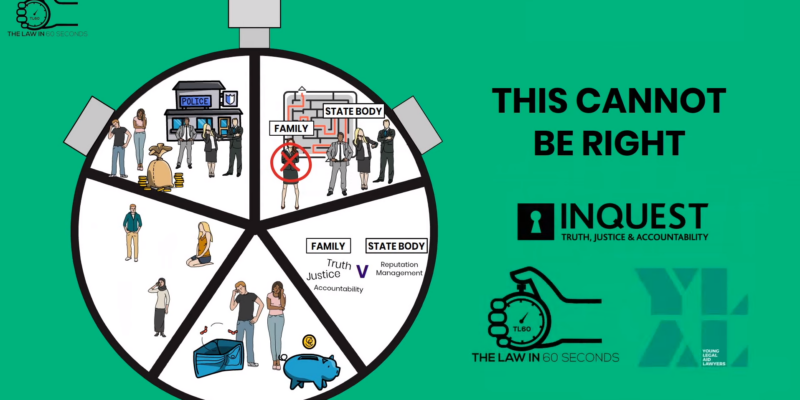 Garden Court North Chambers member, and The Law in 60 Seconds creator, Christian Weaver, has teamed up with Young Legal Aid Lawyers (YLAL) and INQUEST to produce a short video about the importance of legal aid for inquests.

The video supports the ongoing campaign for automatic non-means tested publicly funded advice for bereaved people from the day of a death at all inquests involving the state and corporate bodies.

Talking of his involvement, and the aims of the campaign, Christian Weaver said: “The importance of this campaign cannot be understated.

“The reality of the current state of affairs is that families, often during a time of immense sadness, have the gruelling task of independently confronting state bodies in an effort to understand how their loved one died. Simultaneously, those very state bodies are represented by often multiple lawyers – all funded at public expense. This can create near insurmountable difficulties in families truly being able to obtain the answers they so desperately seek.

“Coroners have an important legal power and duty to write a ‘Prevention of Future Deaths’ report if they deem there to be a risk of future deaths occurring in circumstances similar to those that become known during an inquest. Given that the coroner must then send these reports to organisations/officials able to take action to reduce such risks; society at large greatly benefits if funding exists for lawyers to represent families at inquests. This is because lawyers, by way of their questioning of state bodies, can and often do expose issues that trigger the coroner’s duty to write a report.”

The campaign centres around the Judicial Review and Courts Bill in which proposed amendments to enact legal aid for inquests have been made and which went before the House of Lords on 7 February for its second reading.

Before the reading of the Bill in the Lords INQUEST and JUSTICE submitted a joint briefing in which amendments to the Bill were proposed. Three key issues were outlined:

Read more about our members’ activities and expertise on our Barristers page.