In Your Defence by Sarah Langford – a review 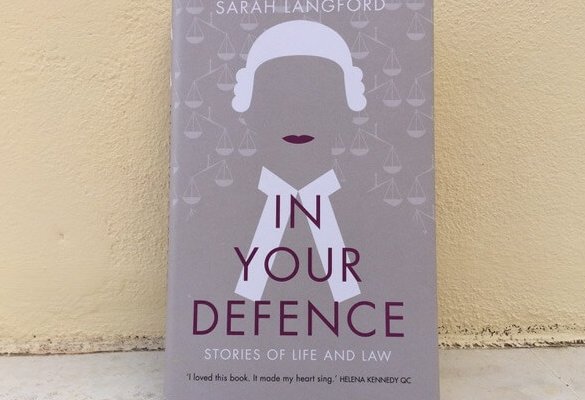 Some years ago barristers who do the worst paid work, criminal legal aid, threatened to take direct action such as refusing to attend court for a day in protest at constant cuts in their already meagre fees. The Secretary of State for Justice (SSJ) at that time, a former television producer, was a man with no interest in, much less any understanding of what legal aid barristers actually do. Desperate to show his tough credentials Chris Grayling attacked lawyers and planned to impose further cuts to fees. He sought to enlist press support by encouraging resentment against the barristers by telling lies about the fees they earned, leading inevitably to headlines and stories in the press about how fat cat legal aid lawyers were holding the country to ransom at a time of austerity for everyone else.

Although this book keeps fairly well clear of the politics of legal aid, at least until the last couple of pages, the social consequences of endless cuts are clear enough. The book should serve as a rebuke to that former SSJ, his arrogance and his sheer ignorance of his brief. The truth is that barristers work long unsocial hours and travel long distances to represent some of the most vulnerable people in society, and they do this for very modest pay.

The author is a barrister whose practice was in criminal and family law cases for some eight years or so before she took a break to have a family. Her book is written in clear and accessible language aiming to help the general public gain a better understanding not just of what barristers do but how their clients react and what the implications are for those affected by a court judgment.

The book is also written with care, compassion and empathy. The author is someone who evidently cares for those she represents even though they often do not appear to care about anything very much, themselves included. The book gives the reader a clear idea of what it is like work as a barrister, to sit alongside a scared young client barely able to articulate his own defence, or sit in a cell with a client waiting for a jury to return with their verdict, knowing that the client will end that day either back home with his family or in a prison starting a lengthy sentence.

Through a series of cases, themselves reflecting an amalgam of cases raising a host of different issues, the author introduces us to a number of former clients with all their foibles, weaknesses and failings.

A tragic cottaging case leads the author to ponder how she was “ashamed of something deeper: of my hubris, my delight in the details of the case, my thrill at the prospect of winning and my failure to remember the deeply held pain that lay behind every life I rifled through.”

When the author represents Saba, the young woman brought over from Bangladesh as a chattel of her new husband and has to face the intense embarrassment of telling her story of rape and physical abuse in an English courtroom, the empathy of the author for her client shines through as she helps steer her client through the intricacies of English family law.

When confronted with the messy life of Raymond, charged with burglary unable to tell the real story behind his offending for fear of betraying someone near and dear, we are reminded that “there is no one truth and no one story” but rather that her responsibility as a barrister was as she puts it ”to guide those who came my way as best I could through the law and its systems, with humanity and empathy.”

Later we meet Maggie, the 22 year old mother of two facing the removal of her second child due to her alleged poor mothering skills. The author fights for Maggie to be given the chance to prove that she can break a four generational parenting failure, thereby not only saving the local authority hundreds of thousands of pounds but also allowing Maggie to keep her child. The author ponders why “a local authority was prepared to spend money on experts to prove a mother couldn’t parent, rather than on helping her learn how to do so.”

Cases like Daniel’s however raise different issues. Charged with serious offences including false imprisonment, kidnapping, rape and conspiracy to supply heroin offences, its impossible to avoid feeling sorry for the complainant, a hopeless junkie and prostitute but the question to be faced is, is she telling the truth or using the defendants as cover to save an illicit relationship that might otherwise be imperilled? The case illustrates the problems that a multi-handed criminal case throws up – when its everyone for themselves but what one defendant does, such as the decision whether or not to give evidence, impacts on everyone else in the case.

The case of Helena and Ed illustrates the frustration involved in a family case where the parents weaponise their children in a fight to hurt each other, whilst at the same time trying desperately to convince themselves that what they want is really also what is in the best interests of their children. The author concludes that parents need the law when they cannot find an amicable solution as, even more, do the children. We are however reminded of the wise words of one judge who said “if the people who appear before me actually put their children’s interests before their own, my court would be an empty one.”

Together these stories from both the criminal and family courts show that life is messy and court cases can seldom be reduced to black and white. By the end of the book, the reader will have a better understanding of how the law works and about the often mysterious process of a court case sometimes lasting many months. Hopefully too the reader will be left with a better understanding of why the law matters to all of us and why the damage that has been done to it by successive governments, only ever interested in perceived short term gain, is a matter of concern not just those who work in this system but to the general public, those for whom the system exists in the first place.