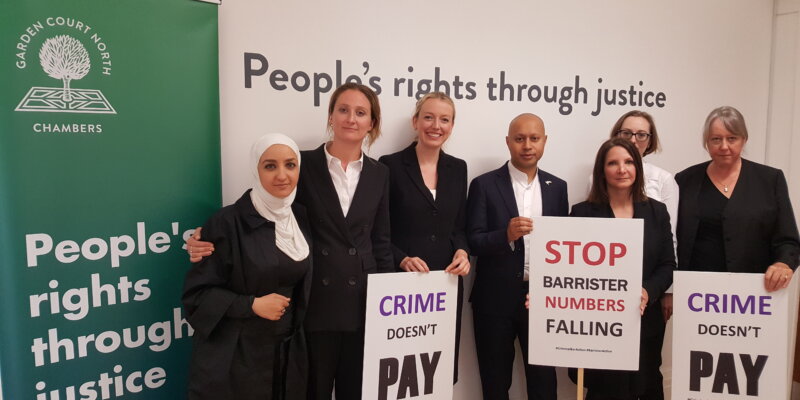 Members of the Garden Court North Chambers criminal defence and appeals team yesterday joined colleagues at the criminal bar in the first day of walkout action by CBA members.

Sets from across Manchester and the North West congregated outside of Manchester Crown Court in solidarity with similar action taking place by criminal barristers across England and Wales.

The events were covered widely by local and national media, with Garden Court North Chambers being well represented.

Aarif Abraham spoke to Granada reports which also featured Rosalind Burgin. Rosalind gave further interviews to The Times, Sky News, The Mill and the Manchester Evening News alongside Rebecca Filletti, who also gave a comment to the Metro. Mira Hammad was quoted in The Guardian and Nina Grahame QC spoke on LBC, BBC Lancashire (listen from 2:14:00) and BBC Manchester (listen from 1:42:18).

There were countless other pieces of coverage including the CBA chair, Jo Sidhu QC, and vice chair Kirsty Brimelow QC.

Criminal barristers voted overwhelmingly in favour of taking action over the level of investment in the criminal justice system. The underfunding led to a pre-pandemic backlog of 41,000 cases. Following the measures put in place during COVID-19 restrictions the backlog has grown to 58,000 cases.

This crisis has been deepened by levels of legal aid fees which have been slashed by 28% in the last decade. The median income of a junior criminal barristers in the first three years of practice is now less than half the minimum wage if based on a 40-hour working week. As a result, 300 junior barristers left the profession last year. This mass exodus has led to further delays illustrated by the fact in 2021, 567 trials had to be adjourned at the last minute due to no counsel for prosecution or defence.

CBA members are calling on the government to implement an immediate 25% rise in criminal legal aid fees which it says could be met from the £240m in legal aid payments saved in the period of lockdown in 2020-21 when fewer cases were heard. The CBA also points to the £264m earned by the treasury by selling off parts of the court estate over the past decade.

Further days of action are planned in coming weeks if the dispute is not resolved.

Our team of criminal barristers specialise in criminal defence and appeals work across the spectrum through to the Supreme Court and the European Court of Human Rights. The Team consists of barristers with experience at all levels, from juniors to Queen’s Counsel, and is committed to ensuring that a defendant’s fundamental rights are protected throughout criminal proceedings.

This commitment to each client’s rights distinguishes Garden Court North Chambers’ barristers from the rest. The client remains the focus throughout the preparation and presentation of each case and remains fully involved in the process.