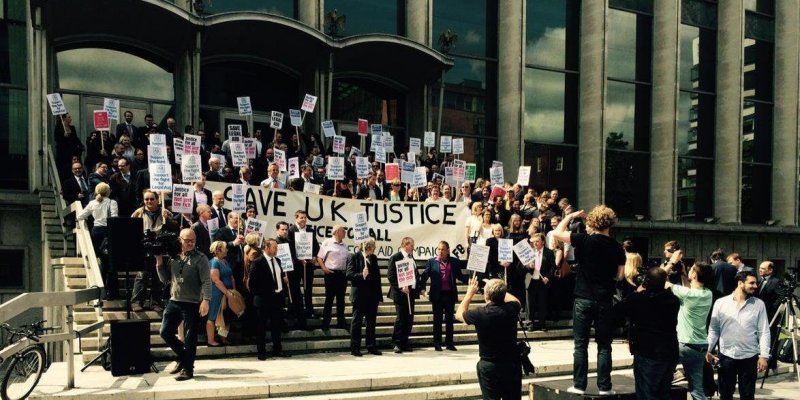 On 1st April 2018 the Ministry of Justice (MOJ) introduced the latest version of the Advocates’ Graduated Fee Scheme (AGFS). Under that revised scheme, barristers undertaking publicly funded criminal work (who have already seen cuts of 40% to their incomes over the last 20 years, with current fees at a lower level than they were in 1998) will experience a further significant overall cut to their fees. This will result in us no longer having the resources to carry out properly the work that would be expected of us in defending people charged with criminal offences.

Cuts to advocates’ fees are part of a wider problem. The Criminal Justice System (CJS) is at breaking point and is failing victims, defendants and the wider public. For example:

The CJS is a matter of importance to everyone – none of us can be sure that we will not appear in the criminal courts as a witness, as a juror, as a complainant, or even as a person charged with a criminal offence, or be sure that someone close to us will not fall into one of those categories.

In response to the latest version of AGFS, on 29th March 2018 Garden Court North Chambers announced that our members would not accept publicly funded criminal workunder representation orders dated on or after 1st April 2018.

In taking that action, which was recommended by the Criminal Bar Association (CBA) and which over 100 other chambers in England and Wales have also taken, we hoped to persuade the MOJ that they needed to re-consider plans to change the AGFS payment scheme.

Unfortunately, the MOJ shows no sign of changing the AGFS payment scheme or indeed of recognising the crisis in the CJS. Consequently, the CBA has invited barristers to consider escalating the action. Part of the CBA’s announcement includes the following points, which we reiterate:

We agree with these sentiments and we agree to implement the action being recommended by the CBA. Accordingly, from 25th May 2018 members of Garden Court North Chambers will no longer accept the return to them of criminal briefs from other barristers.

We hope and trust that our colleagues in other chambers will also adopt this policy since it is vital that the criminal bar acts together in this action. We know we will receive the support of our solicitor colleagues despite the extra burden this action will place on them. Like us they know the seriousness of the current situation and the necessity for this action. We regret that this action is necessary but the MOJ know well the onus is on them to negotiate with the CBA in an effort to resolve this situation.