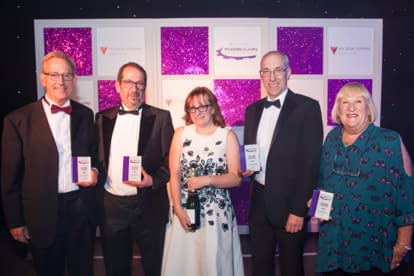 Garden Court North Chambers are pleased to announce that we have recently been awarded an “Outstanding Achievement Award” by both Modern Law Magazine and Modern Claims Magazine for our work on behalf of the families of those who died in the Hillsborough disaster during the inquests that ran from March 2014 until April 2016 in Warrington.

During the inquest Pete Weatherby QC led a team of counsel that included Mark George QC, Kate Stone and Andy Fitzpatrick. Mark, who is Head of Chambers, said: “It is always nice to be recognised for our hard work on behalf of our clients by our fellow professionals and we are grateful for these awards.  But we should remember that the new Inquests would never have happened if it had not been for the truly inspiring campaign by the families of those who died in the disaster, many of whom themselves had died by the time of the new Inquests. Their determination to right a historic miscarriage of justice was an inspiration to all of us during the Inquests and we dedicate these awards to them.”