This webinar will focus on the European Court of Human Rights, which is currently under intense scrutiny as are human rights generally. From Britain in the West to Russia in the East previously unchallenged international laws and norms are being contested. Turkey’s relationship with the Court, arguably, personifies and encapsulates the challenges for the Court and the consequences for victims of rights violations. Is there a balance to be struck and how might it be achieved? What are the implications for other States? Are there more radical solutions? Join us for this fascinating and timely talk.

The webinar will be chaired by Leto Cariolou, Associate Member of Garden Court North Chambers and hosted by Işıl Aral from Manchester University’s International Law Centre who together with our panel of speakers will talk focus on the relationship between the European Court of Human Rights and Turkey. They will also address the Court’s response to the emergency measures adopted in Turkey following the coup of 15 July 2016 that tried to seize power and overthrow President Erdogan.

Michael Ivers QC – Barrister, Garden Court Chambers, London – will provide an analysis of the Court’s case law in the context of national emergencies and the difficult considerations it faces.

Ezgi Basaran – Journalist Radikal Newspaper; Research Associate, University of Oxford – will present on the magnitude of the emergency measures in Turkey, the impact of the measures on ordinary people and, in particular, on press freedoms.

Hasan Bakirci – Deputy Registrar, Section II, European Court of Human Rights – will discuss the challenges the Court faces and the particular difficulties in respect of the situation in Turkey today.

Clare Ovey – Head of Department of Execution of Judgments of the European Court of Human Rights, Council of Europe – will present on what happens after a judgment. How are decisions enforced and what challenges are faced in the execution of the Court’s judgments. 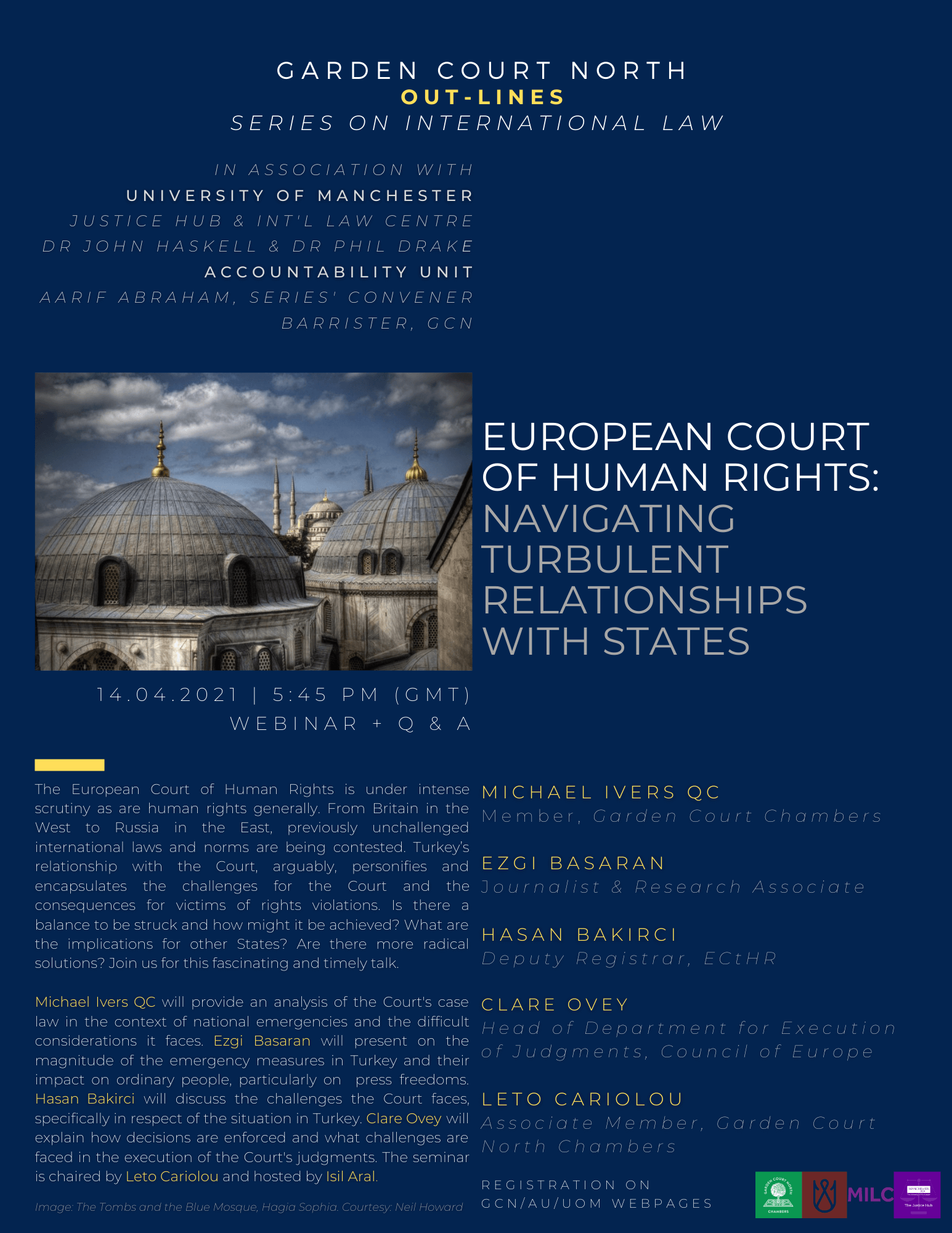 If you would like to know more about our events and international work, please contact: the Head of our Practice Management Team, Annmarie Nightingale, on +44 (0) 161 817 6377 or at gcn@gcnchambers.co.uk.

Michael Ivers is a barrister specialising in criminal defence and international human rights law currently practising at Garden Court Chambers. He has extensive expertise in murder, terrorism, human trafficking, drug offences, revenue fraud and sexual offences trials, including at the European Court of Human Rights. Previously, he was Chair of the Kurdish Human Rights Project and Treasurer of the Bar Human Rights Committee. He became Queen’s Counsel in February 2016.

Ezgi Basaran is a Turkish journalist and author of “Frontline Turkey: The Conflict at the Heart of the Middle East”, a book exploring Turkey’s relationship with the Kurds in the context of the Middle Eastern Crisis. She was the youngest ever editor of Radikal Newspaper, the biggest centre-left newspaper in Turkey, and is now Research Associate at the University of Oxford, where she is examining the interplay between North African Islamist movements and Turkish Islamism.

Hasan Bakirci is a Senior Lawyer at the European Court of Human Rights and currently Deputy to the Registrar of the Filtering Section at the Court. He is the author of a practitioner’s handbook on Article 3 of the European Convention on Human Rights. He studied law in Istanbul and Oxford, where he graduated with a distinction both times.

Clare Ovey is currently Head of Department for the Execution of the Judgments of the European Court of Human Rights. Previously, she worked at the Registry of the Court and at the Committee of Ministers as Secretariat. She is the author of the book “The European Convention on Human Rights”, a comprehensive guide of the work of the Strasbourg Court and the Convention. Clare is a Cambridge University law graduate and qualified solicitor.

Isil Aral is a public international law lecturer at Koç University and co-founder of the Women in International Law Network at the Manchester International Law Centre. She obtained an LLM in human rights law at the London School of Economics and conducted a PhD research at the University of Manchester on unconstitutional changes of government and international legal theory. She was called to the Istanbul bar in 2012 and practised criminal law for three years at Bayrakta Law Firm in Istanbul.

To book your place on this seminar, please use the booking form below. If you have any queries please email the Practice Management Team at gcn@gcnchambers.co.uk.

Bookings are closed for this event.