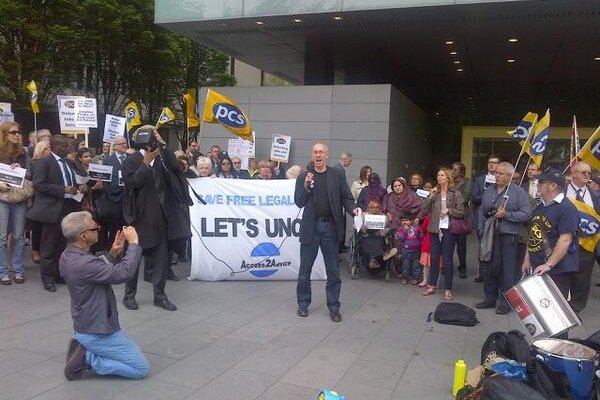 Members of Garden Court North Chambers were involved alongside many other members of the profession in direct action against plans by the coalition government after 2012 to impose further cuts on already low criminal legal aid rates. Such action, which included days when barristers refused to attend court and a temporary ban on handing “returns” from other Chambers, was successful in resisting further planned cut to fees for advocacy although solicitors have had to endure further cuts to the fees under the litigators scheme. Head of Chambers Mark George QC spoke at a number of meetings and rallies arguing for action to be taken to prevent further cuts and for barristers and solicitors to unite to ensure that action had the maximum effect.

The disastrous impact of cuts to civil legal aid imposed as a result of the Legal Aid, Sentencing and Punishment of Offenders Act 2102 (LASPO) was no more graphically illustrated than after the appalling Grenfell Tower tragedy in 2017. When Pete Weatherby QC was interviewed on television he pointed out that cuts to legal aid funding had prevented residents, who had already voiced their serious concerns about the safety of the tower block, from obtaining legal advice that might have allowed them to challenge their landlords failures before the disaster occurred.

We welcome the recent report from Lord McNally about the shocking and profound impact of legal aid cuts on the ability of many of the poorest and most vulnerable in society to access good quality legal advice as well as the new-found enthusiasm of the Labour party for proper funding of legal aid, but our pleasure is tempered by knowledge that the measures proposed in Lord McNally’s report are not yet official Labour party policy and that when Labour was last in office they were equally enthusiastic cutters of legal aid. We look forward to seeing previous cuts restored because access to justice requires that lawyers prepared to do the work are available and one effect of previous cuts has been to see the number of solicitors offering legal aid advice significantly fall.  If that trend is to be reversed proper funding for legal aid must be a priority for government of whatever complexion.