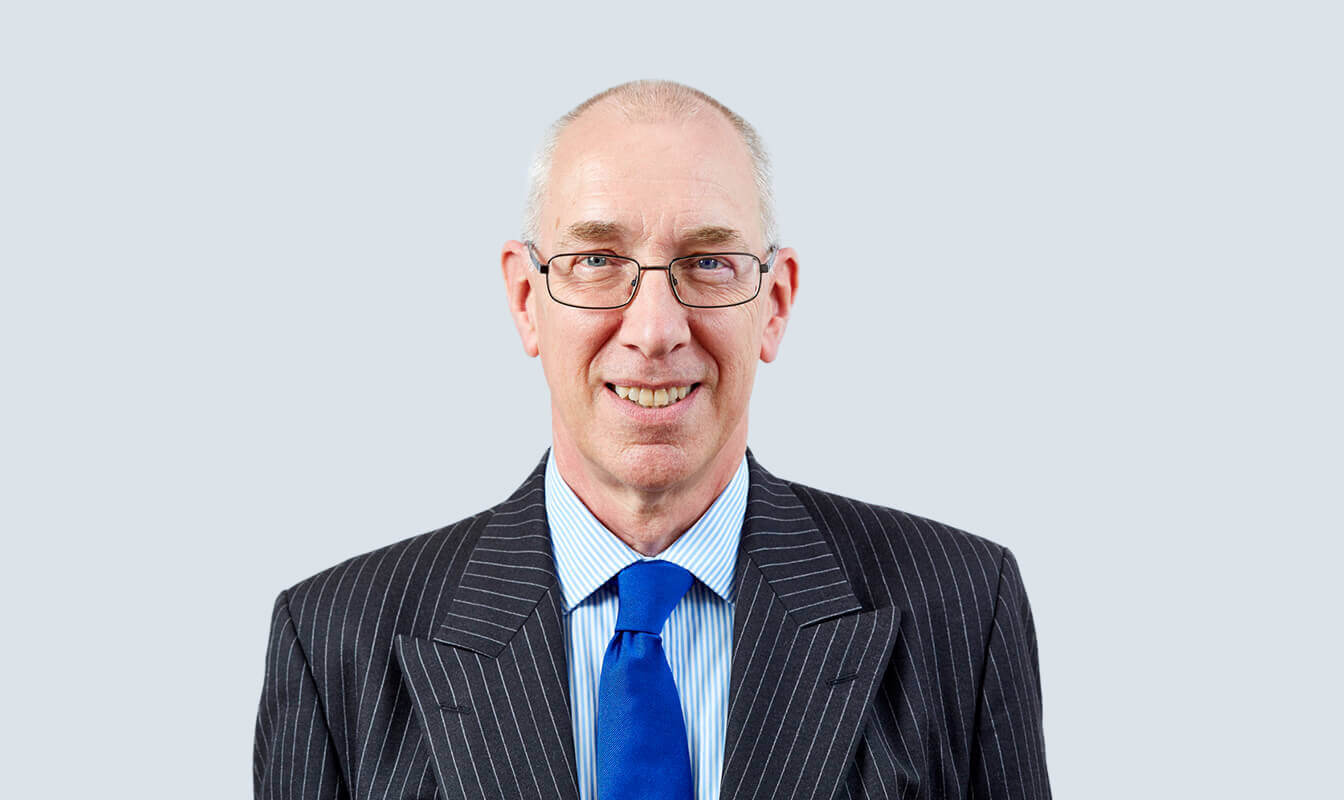 A good tactician with strong advocacy skills, he shows empathy to all concerned and is liked and respected by the judiciary.Legal 500, 2021 (Crime)

Mark George QC, who has been Head of Chambers at Garden Court North Chambers since 2013, is a highly experienced defence trial advocate who is regularly instructed in cases of murder, manslaughter, rape and other serious sexual cases. He also conducts high profile criminal appeals and miscarriage of justice work. He was instructed for 22 families in the Hillsborough Inquests, which concluded in April 2016.  Since then Mark has returned to defence work in the Crown Court. Mark is a regular blogger and legal commentator in the media and on Twitter on issues of criminal justice, civil liberties, human rights, legal aid and access to justice. He is a trustee of Amicus ALJ, the US death penalty charity.

Mark is determined to provide those he represents with excellent service. He takes time to explain all the options to his clients, including the perceived strengths and weaknesses of their case, and is concerned to make sure that his clients understand what is happening in the preparation of their case. He has a strong empathy with his clients and, whilst providing a thoroughly professional service, also makes his clients feel relaxed and able to discuss their concerns. Mark provides as strong and resolute a defence as possible, and endeavours to obtain the best possible outcome for every client. He is known for the thoroughness of his preparation in all cases.

Mark was determined to become a lawyer after seeing TV footage in the mid 1960s of American police officers beating civil rights demonstrators. He wanted to represent people fighting for their rights against the power of the state. Having qualified as a lawyer he joined a small radical set of chambers then located at the top of Farrer's Building in the Temple in London (which later became 2 Garden Court and then Garden Court Chambers). Many of his first cases involved defending protesters arrested after a large anti-Nazi demonstration against the National Front in South London in 1977. Subsequently he has represented many protesters from political groups, as well as miners, print workers, environmentalists and animal rights activists. Although Mark's work is clerked entirely through Garden Court North Chambers, he is a door tenant at Garden Court in London.

Mark George QC is ranked by The Legal 500 as a Tier 1 Leading Silk.

Mark is a highly experienced defence trial advocate. He took silk in 2009 and is regularly instructed in cases of murder and manslaughter.

R v Denzil Brown [2019] murder. Originally tried with five other defendants. Case against D who was not at the scene turned on analysis of CCTV footage at the time of the murder. Submission of no case to answer upheld but prosecution successfully appealed leading to re-trial of case of D alone. Acquitted by jury.

R v Suleyman [2019] allegations of multiple rape and trafficking with two others. Most of rape charges dropped at end of prosecution case after cross-examination of complaint.

Mark is also instructed in particularly serious cases of rape and sexual assault and is particularly skilled in representing those accused of historic offences. Mark is keen to act in such cases because there are few other cases where a defendant’s right to a fair trial is more seriously under threat, particularly when the allegations are of a historic nature.

Examples of Mark’s work include representing defendants in:

Mark is experienced in bringing judicial reviews involving criminal cases as well as inquests and has experience of challenging decisions of the Criminal Cases Review Commission.

Mark has considerable experience of hearings before the Parole Board where he represents prisoners, particularly before lifer panels and has advised in many cases involving serving prisoners and their rights in areas such as sentence calculation and security categorisation.

Mark undertakes inquests on behalf of bereaved families often following deaths in police or prison custody. Mark also represents interested parties at high profile inquests following controversial deaths and where substantial cross-examination of police officers is required. In 2013 Mark was instructed along with Pete Weatherby QC on behalf of 22 families who lost loved ones in the Hillsborough disaster. The inquests started in March 2014 and concluded in April 2016.

Mark is an opponent of the death penalty and has a strong interest in death penalty cases in the United States. His first involvement in death penalty work came in 1998 when he worked pro bono in a capital murder trial in Texas where he assisted the local attorneys with the preparation of the case for trial. This involved being temporarily admitted as a member of the Texas Bar. Since that time he has been involved with Amicus, an organisation which trains young lawyers to undertake internships in the US assisting in death penalty trials and appeals.

In January 2017 Mark spent two weeks in Houston, Texas assisting local attorneys with trial preparation on several capital cases, work which he has been able to continue with once back in the UK.

He regularly teaches at the Amicus training sessions on Trial Procedure in Capital Cases, Jury Selection and Mitigation Issues. He also teaches on Appeals in State and Federal Courts in Capital Cases. Each autumn, subject to availability, he delivers a popular lecture tour on the “death penalty in the US” to a number of law schools and universities across the UK.

He has also written a number of articles for the Amicus Journal on aspects of US death penalty law. In 2008 Mark became a trustee of the charity.

Mark has been involved with writing Amicus Curiae briefs in four US Supreme Court cases.

R v M N [2021/22] D formed relationship with married woman. Alleged to have persuaded her and her husband to serially sexually abuse their own son over several years when he was under 13. Offences of the gravest nature. Jury convicted.

R v Hall [2021] case involving sex worker who disappeared in 2002. Skeletal remains found in 2012. Lengthy delays before D charged in 2019. Application made to stay indictment on grounds of delay and prejudice. Case proceeded to trial but at last minute Crown offered plea to manslaughter which was accepted. Voice recognition evidence involved.

R v J B [2021] defended 14-year-old, himself the victim of grooming into drug gang, charged with murder after group attack on disabled local man. Cut-throat defence based on careful analysis of hours of CCTV footage obtained by police showing dynamics within gang before the offence which resulted in jury acquitting of murder and returning verdict of manslaughter instead.

R v Rashpal Gill [2021] charged with murder on joint-enterprise basis after assault on customer who tried to rob a drug dealer. Convicted of murder.

R v Denzil Brown [2019] murder. Originally tried with five other defendants. Case against D who was not at the scene turned on analysis of CCTV footage at the time of the murder. Submission of no case to answer upheld but prosecution successfully appealed leading to re-trial of case of D alone. Acquitted by jury.

R v Suleyman [2019] allegations of multiple rape and trafficking with two others. Most of rape charges dropped at end of prosecution case after cross-examination of complaint.

April 2018 to date – Representing one of six men charged with murder in Oxford in 2017.

February to March 2018 – Represented one of three men charged with a drive-by shooting in Sheffield.

R v JW (2017)  Defended man accused of murder where victim had died only after defendant had already been convicted of GBH – R v JW.

R v Assad Hussain (2013) one of 9 defendants in the Oxford sex-grooming case Operation Bullfinch at the Old Bailey.

R v Thompson (2011): Represented defendant charged with rape of a woman walking her dog near Elsecar reservoir in S Yorkshire in 2010.

R (Mohammed Ali) v Director of High Security [2009] EWHC 1732 (Admin): Category A prisoners designated as either “high” or “exceptional” escape risk are entitled to be given sufficient reasons for the decision to maintain that status so as to enable them to decide whether to challenge that decision.

R v Ian Price (2009): Acquitted of attempting to murder his wife by rigging up a device to start a fire during the night.

R v Little(2008): Partial acquittal of teacher charged with serious sexual assault on pupil who developed a crush on him.

R v Brereton and others (2008): Application to dismiss indictment against environmental protesters arrested in relation to campaign against widening of M1 motorway upheld by judge.

R v Bakish Khan and others [2008] EWCA Crim 531, The Times 7th April 2008: Whether police officer who knows officers who are to give evidence can serve on juries.

R v Robinson (2008): Guilty plea to offence under section 113 Anti-Terrorism, Crime and Security Act 2001 (sending noxious thing likely to cause harm or intimidate) by alleged member of the SNLA who had sent packages containing caustic soda to two people. Sentenced to 6 years imprisonment.

Junior counsel in R v Khan (Sultan)  [1997] AC 558; [1996] 2 Cr. App. R. 440: The Crown sought to rely on evidence obtained from a covert listening device placed in a private home. The case exposed the lack of statutory regulation of surveillance at the time and forced the government to introduce legislation to put such activities by the police and security services on a statutory footing. This was achieved first through the Police Act 1997 (Part III) and then by the Regulation of Investigatory Powers Act 2000.

Mark publishes regular commentary on his own blog.

Recent articles have covered hearsay evidence after Al-Khawaja v UK; the state of the criminal justice system; IPP sentences; why the policy of “believe the complainant” was wrong and failures of the disclosure process

In addition has previously written many articles and frequently provided media commentary of which the following are examples:

Mark is highly experienced in providing legal commentary for TV and print media. He has appeared on numerous news and media outlets regularly providing comments and analysis on legal issues.

Mark’s Privacy Notice may be viewed by clicking here.