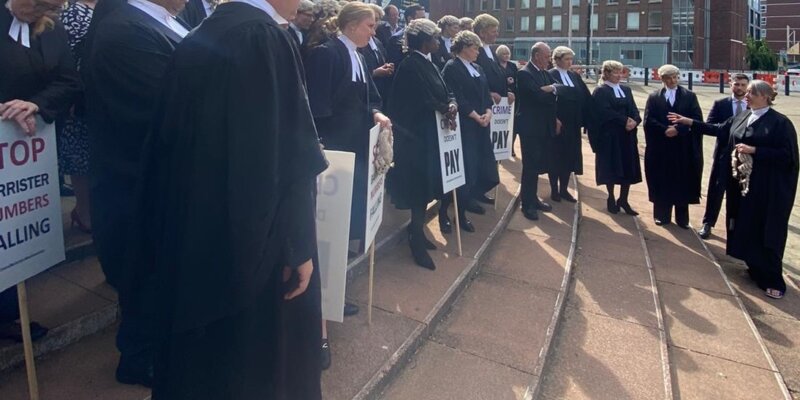 Garden Court North’s criminal defence and appeals barristers are continuing to demonstrate their opposition at the shortfall in the supply of criminal barristers and the growing crisis in the criminal justice system.

To mark the start of the third week of barrister walkouts across England and Wales yesterday, members of Garden Court North’s criminal defence and appeals team congregated outside Preston Crown Court to voice their concerns.

The team attended the demonstration alongside their colleagues from the Northern Circuit.

The action comes a week after barristers from the North West of England held a similar gathering outside Liverpool Crown Court on Monday 4 July and two weeks after the first day of action in Central Manchester on 27 June.

The walkouts have come about after criminal barristers voted overwhelmingly in favour of taking action until their demands are met. Demands which include:

Chronic underfunding in the criminal justice system led to a pre-pandemic pileup of 41,000 cases, which has now grown to over 58,000 cases, following the measures put in place during COVID-19 restrictions. This crisis has been deepened by legal aid fees having been slashed by 28% in the last decade.

Pre-trial hearings, which are essential for case progression, average at between just £91 and £126 for a day in court. Those lowly fees, which equate to working at below half the minimum wage, will not be paid until trial concludes, which may be years later.

There remain around 2,400 specialist criminal barristers whose diminishing pool provide the very prosecutors, defence counsel, and part-time judges the Government relied upon to clear a record backlog of cases and subsequent delay for victims of crime caught up in the system.

There are today around a quarter fewer criminal barristers specialising in this type of public work than there were five years ago.

The alarming attrition of criminal advocates resulted in over 218 jury trials in just the first three months of this year being postponed for want of an available prosecution or defence barrister.

In addition, a shortage of court time, exacerbated by the sale of crown court estate over the last decade and a reduction in the number of days judges can sit, has hampered efforts to clear the logjam of outstanding cases.

Four days of action are planned this week, rising to the full five days next week 18-22 July. Days of action will then be suspended for one week, before recommencing the week beginning 1 August, for a full week. The pattern of alternating weeks would then continue, with no end date, remaining under review and subject to the response from Government.