Barbarism Is Beneath Us (Part 1) 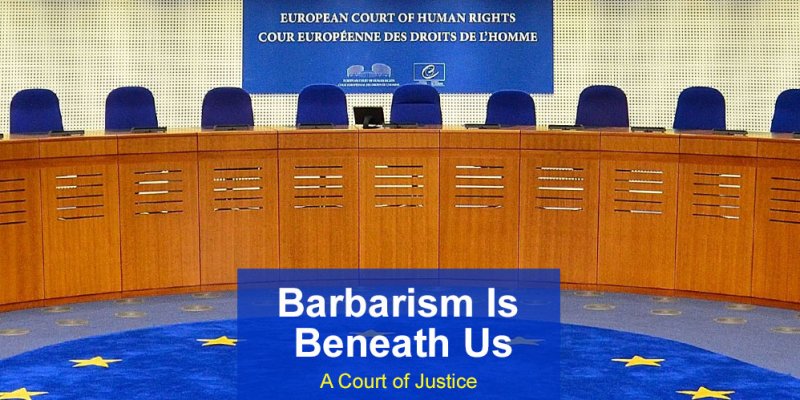 Aarif Abraham discusses, in a five-part series, the challenges faced by the European Court of Human Rights from some of its 47 Member States who are undermining its role as a court of justice with sanctions for implementing the human rights of some 831 million people. He assesses whether these challenges put into question the rights of an individual under the European Convention of Human Rights including to an effective remedy. Part 1 introduces the contours of the debate; Parts 2, 3 and 4 consider three specific and practical problems the Court faces in being a just administrator or deliverer of proper sanction. Part 5 concludes by providing some tentative conclusions and recommendations by determining how non-compliant and intransigent Member States in the Council of Europe can change course and how the integrity of the Court can be maintained.

Part 1: A Court of Justice

On 29th November to 1st December 2018, biennial panel discussions took place between the Registry of the European Court of Human Rights (Court) and NGOs/applicant’s representatives from across the 47 Member States of the Council of Europe (Council). Discussions centred around a number of pressing issues that impact applicants including:

The preceding week government agents for the 47 Member States had a similar dialogue with the Registry of the Court by providing suggestions for reforms that States would like to see to the Court’s procedural and substantive decision making processes. This regular and frank dialogue process, whereby the Court, every two years, invites key prospective NGOs/litigants/government agents to discuss how the Court can operate differently is very welcome and remains a distinctive feature of perhaps any international court; reflecting its willingness to continue evolving its approach to changing circumstances.

The timing of the panel discussions was particularly apt. The President of the Court, Guido Raimondi, emphasised at the outset to discussions that growing authoritarianism, nationalism and intolerance threaten to: (a) compromise the defence of the rights of minorities; (b) create an unworkable case load for the Court; and (c) challenge the legitimacy and authority of the Court.

This year marks the 70th anniversary of the Council and next year is the 60th anniversary of the establishment of Court. It was at the Congress of Europe in The Hague in May 1948 that European leaders, including Winston Churchill, François Mitterrand and Konrad Adenauer, issued a bold declaration that: “We desire a Charter of Human Rights guaranteeing liberty of thought, assembly and expression as well as right to form a political opposition. We desire a Court of Justice with adequate sanctions for the implementation of this Charter.” It was subsequent to that declaration that both Charter and Court were established by the newly created Council and we know them today as European Convention on Human Rights (Convention) and the European Court of Human Rights.

Whether the Convention is in fact an adequate guarantor of rights and the Court a just administrator or deliverer of proper sanction is somewhat doubtful. It is doubtful given the indirect threat from rising autocratic and nationalist governments across its 47 Member States, as alluded to by Raimondi, but it is more so for three, principally, practical reasons:

First, the inherent tension the Court must assuage between the right of individual petition to the Court (both full applications and interim measures) and the severe/mass curtailment of Convention rights by governments antithetical to the rule of law (the floodgates argument).

Second, the length of time it takes the Court for decisions or judgments to be issued and the good faith the Court must place on State subsidiarity given the resource and other constraints imposed by those Member States (the resource constraint argument).

Third, the presumption that: subsidiarity is necessarily a two way process; judgments of the Court will be implemented; and, where judgments are not implemented, that they are adequately enforced by the Court through the Council’s Committee of Ministers (CoM), which is the executive body of foreign ministers representing Member States (the norm failure argument).

In Parts 2, 3, and 4 each of these three arguments will be taken and discussed in turn to assess to what extent the Court can fulfil some of the lofty visions its founders had hoped for it. In Part 5 some tentative conclusions and recommendations will be provided to determine how a State’s non-compliance and intransigence can be addressed and how the integrity of the Court, in the face of systematic challenge, can be maintained. Part 2, which considers the floodgates argument, will follow next.