Barbarism Is Beneath Us (Part 5) 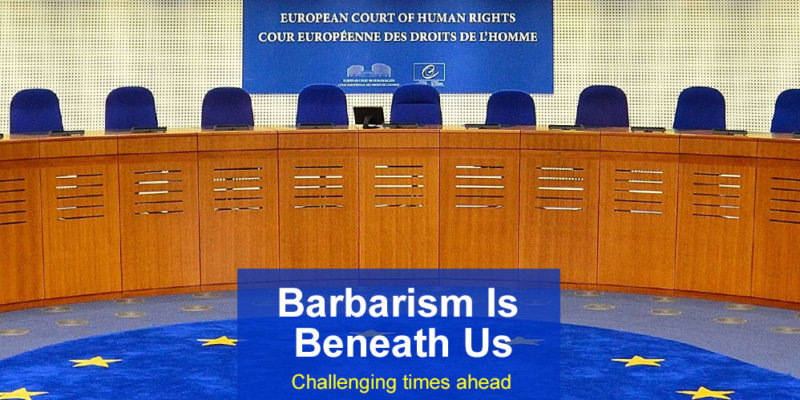 In Part 1 Aarif Abraham introduced the challenges faced by the European Court of Human Rights (Court) with growing authoritarianism, nationalism and intolerance across its 47 Member States. Those broad challenges were linked to three direct threats to the Court; which he considered in Part 2, Part 3 and Part 4. In Part 5 of 5, below, he considers the challenges faced by applicants as well as systematic problems faced by the Court and Council of Europe (Council) going-forward. He provides some tentative recommendations and suggests that a return to the vision of the Court’s founders, which placed individuals at the forefront of their concerns, may help us out of the anti-rights and anti-democracy quagmire created by pro-authoritarian sentiment.

An applicant to the Court is often well advised, or should be, of the challenges and pitfalls ahead:

But, aside from all those challenges, there still remains a Court. It has jurisdiction to hear claims under the Convention and is, at times, capable of fearlessly delivering judgments with some means to enforce implementation through the CoM and Council. The leading judgments the Court has issued, for instance, in respect of Turkey during the 2000s transformed that country’s judiciary and legal system whilst the country was a constructive partner. Since Russia joined in the mid-1990s, some 30% of 2,500 judgments, where the Court found at least one violation, have been implemented. That has meant decisions of the Court made it possible for thousands of victims to receive redress at national level as a part of the execution of individual measures. Moreover, there have been hundreds of unilateral declarations and friendly settlements and more than €14 million was paid as just satisfaction to victims in 2017 despite the intransigence of the Russian government generally.

What is the way forward for the Court and Council?

The Court is clearly constrained by matters outside its capacity to influence – budgetary and resource restrictions as well as systematic challenge by the apex courts and legislatures in various Member States. That must change by concerted and co-ordinated re-assertion of the primacy of international human rights law across all liberal minded Member States of the Council as well as friendly States and organisations from outside the Council (including regional organisations like the European Union).

There are, however, a number of areas where, in the name of complementarity and subsidiarity, the Court itself (largely under duress) has abrogated its rightful place in being the prime adjudicator in upholding the rights of an individual against a state; in circumstances in which the individual has no meaningful or effective remedy or legal recourse.

That abrogation is down to reforms such as the pilot judgment procedure, limitations in the scope of Rule 39 interim measures, reluctance to re-open cases where non-implementation is prolonged (through the CoM’s use of the infringement procedure under Article 46(4)) and deference given to a state, under an apparent margin of appreciation, for fear of alienating them. The abrogation also relates to excessive self-criticism and self-censorship due to the wider fear in the Council and the Court that Member States will leave the fold of the Council and, therefore, its human rights standards and protections.

The abrogation can, of course, be reversed in light of a favourable political climate; and arguably a favourable climate is created by creative, persuasive and persistent advocacy. In that respect, the members of the EIN issued a joint statement on 1st December 2018 noting that 2019 will be an important year for the European human rights system as the Interlaken process comes to an end. In accordance with the 2015 Brussels Declaration, the stock-taking and review of the process will include an analysis of reforms including on the implementation of judgments of the Court. A key recommendation is that the Court and Council take seriously and significantly increase engagement with civil society representatives and NGOs; the Court sets a good precedent with some positive innovations in recent years following NGO engagement but greater State intransigence and attacks by States on NGOs representing applicants is very concerning.

A legitimate question is whether States that threaten the foundations of the Court and Council are any longer suitable to be Members; their suspension entails some obvious benefits in terms of the budget, symbolic significance of removal and the possible emblematic effect of continued processing of all remaining applications with respect to a former Member State. The normative significance of suspension may be greater than the normative value of retention when their commitment is half-hearted. Many NGOs, such as, for instance, a large proportion of Russian Human Rights Defenders, are reluctant to push for Member State expulsion as they see, perhaps correctly, that some influence of the Court and Council on the human rights compliance of an intransigent State is better than non-at-all; not least for an individual applicant whose life may be significantly transformed (if not saved) by a positive judgment with specific remedies whether individual or general. At some point, however, widespread rights violations without domestic legal remedy and non-implementation of Court judgments by the violating State is practically equivalent to an individual applicant not having a right to individual petition at all; when that position is ultimately reached should be based on a cautious and reasoned assessment by both the Court and Council on what is of the widest benefit for individuals. That would be upholding the spirit as well as the letter of the Convention.

While a technically-oriented lawyer and policy maker can appreciate the vast policy, legal and practical constraints the Court is burdened with and the fact that it is neither a court of last resort nor a court of first instance we must bear in mind the individual applicant whom the Court itself was designed to serve and protect. The individual applicant who is, all so often, dispossessed, marginalised, and destitute; and often encumbered by insurmountable obstacles including the vast machinery of the state. Without recourse to domestic right or remedy, for those applicants the Court is and remains the last vestige of hope.

In this age of growing authoritarianism it would behove us to remind ourselves of the vision of the founders of the Court and Council. The Secretary General of the Council at its inaugural launch stated that the Convention would proclaim the principles of democracy and the freedom of the individual and prevent the relapse of perilous states into non-democratic regimes. It was borne out of a practicality and necessity as much as it was from ideal. Robert Schuman, the French Foreign Minister, whilst signing the Convention in Rome on 4th November 1950 stated that this Convention “is not as full or as precise as many of us would have wished. However, we have thought it our duty to subscribe to it as it stands. It provides foundations on which to base the defence of human personality against all tyrannies and against all forms of totalitarianism.” This practical necessity was echoed by his British colleague, Sir David-Maxwell-Fyfe, who as Chairman of the Legal Committee of the Assembly in charge of drafting the Convention succinctly summed-up the prevailing sentiment: “Barbarism is not behind us but underneath.” That sentiment is as true today as it was then; and it would serve us well to support the Court and Council to defend against it.