Barbarism Is Beneath Us (Part 4) 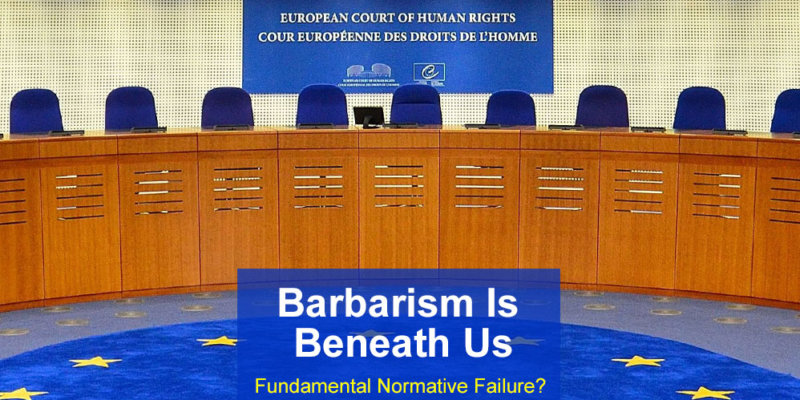 In Part 1 Aarif Abraham introduced the challenges faced by the European Court of Human Rights (Court) with growing authoritarianism, nationalism and intolerance across its 47 Member States. Those broad challenges were linked to three direct threats to the Court; the first two of which he considered in Part 2 and Part 3. In Part 4 of 5, below, he considers the failure of human rights norms given the permissive environment in which Member States are ignoring judgments of the Court.

There are three presumptions that applicants, with little knowledge of the Court, tend to make: that subsidiarity is necessarily a two-way process, that judgments of the Court will be implemented and, where they are not, that they are adequately enforced by the Court through the Council’s Committee of Ministers (CoM), which is the executive body of foreign ministers representing Member States. These presumptions are arguably false and there is reason to worry if they are not addressed, particularly if they are as likely to be false in supposedly liberal Member States like the UK as well as less liberal Member States like Turkey, Russia and Hungary.

The UK government’s refusal to implement the Hirst v United Kingdom (No 2) [2005] ECHR 681, which asked the UK to reconsider a blanket ban denying all prisoners the right to vote regardless of the nature of their offence, length of incarceration or their release on licence, led to a 12 year stand-off with the CoM over the implementation of judgments in contravention of Article 13 of the Convention. That refusal was compounded by: (a) threats since 2010 by the Conservative Government to withdraw from the Convention; (b) continuing non-implementation of judgments relating to ineffective investigations into suspicious deaths of individuals during the conflict in Northern Ireland – the McKerr (28883/95) and McCaughey (43098/09) group of cases; and (c) recurrent threats by the UK government to ‘protect’ UK armed forces from “persistent legal claims by introducing a presumption to derogate from the European Convention on Human Rights (ECHR) in future conflicts.”

Margin of appreciation or marginal right?

More significantly, both the continuing UK non-implementation of judgments and threats of withdrawal from the Convention have symbolically signalled the permissiveness to governments in Russia, Turkey, Ukraine and elsewhere of not enforcing judgments against them. Even the Venezuelan and Kenyan governments have used UK non-compliance as justification for ignoring their obligations under the American Convention on Human Rights and Rome Statute respectively.

The Russian Interior Minister, Alexander Konovalov, prior to the Russian Constitutional Court decision disavowing the Court’s judgment in Yukos and objections from the Duma to the Court’s jurisdiction specifically pointed to UK non-compliance. He told the Duma that “the United Kingdom does not execute quite a few decisions by the European Court”.

Moreover, we must consider whether the CoM’s acceptance of the UK Government’s proposed measures with respect to prisoner voting are in spirit with the judgment in Hirst (No 2), which specified broader general measures. Of the 75,000 to 85,000 prisoners in UK prisons only some 100 or so prisoners (on temporary licence) will benefit from the right to vote – there will be no proposed case-by-case assessment of an individual prisoners’ right to vote in the vast majority of cases as arguably required by Hirst (No 2).

The prima facie and, arguably, superficial acceptance by the CoM of compliance only provides further succour to Member States who intend the enforcement stage to be a platform to make demands rather than enter into sincere dialogue on execution – that can only further undermine the Court’s authority and legitimacy by States which are extremely intransigent to rights-based norms. It also begs the question; does accepting a uniquely ‘British’ approach to (denying) prisoner voting necessarily entail a uniquely ‘Russian’ or ‘Turkish’ approach to inhumane incarceration, summary dismissal from public office and indefinite detention without charge?

It is clear non-implementation of judgments in Russia and Turkey is not just limited to judgments on prisoner voting (for which see the cases of Anchugov and Gladkov v Russia (Applications nos 11157/04 and 15162/05) and Söyler v Turkey (Application no 29411/07)). Cases of non-implementation relate to every manner of rights violation. Russia and Turkey are not alone in being perpetual non-compliers – Italy, a presumed compliant State, also has thousands of unimplemented judgments stretching back to the early 1990s and primarily because of its highly inefficient court system. The country’s civil justice system is also ranked second to last among 35 high-income countries in the World Justice Project’s Rule of Law Index for 2017-2018.

Critically, however, non-implementation is no longer a case of silent ignorance by a State of judgments of the Court but more a vocal and ‘reasoned’ attack (in line with an assertive political authoritarianism at home). In the Anchugov and Gladkov and Yukos cases the Russian Constitutional Court held that the compliance with the Court’s judgments would be unconstitutional. Also, as noted in Part 3, Russia and Turkey now account for more the 25% of all pending applications requiring resolution and of judgments issued, as of June 2017, over 10,000 judgments were not put into effect by national governments. That figure is now much reduced because a large proportion of the 10,000 figure have been placed under a ‘leading judgment’ which is a judgment revealing specific structural problems.

George Stafford, Co-Director of EIN, has cautioned that “anyone who is worried by growing authoritarianism in Europe should be very concerned indeed by the widespread failure to implement the Court’s judgments. The Convention system is the mechanism that we designed to prevent a loss of freedom – yet it is not at all clear that the mechanism is working.” Just a handful of cases of non-compliance by a persistent complier and norm upholder like the UK (6 pending cases) allows the normalisation of non-compliance; a dense stone cast into a body of water creating incalculable ripples. That the UK is otherwise an exemplar complier of the Court’s judgment is not a narrative that currently seems to find popular champions amongst elected officials – one wonders that if now is not the time, when authoritarian champion-ism is in vogue, then when?

Part 5 will consider challenges for applicants when making an application as well as the broad issues facing the Court and Council. It will provide some tentative recommendations and suggest that a return to the founders’ visions of the Court, which placed individuals at the forefront of their concerns, may help us out of the anti-rights and anti-democracy quagmire created by pro-authoritarian sentiment.