Barbarism Is Beneath Us (Part 3) 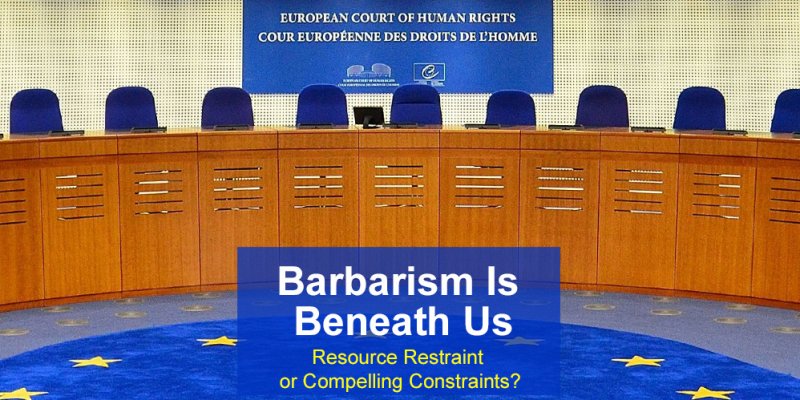 In Part 1 Aarif Abraham introduced the challenges faced by the European Court of Human Rights (Court) with growing authoritarianism, nationalism and intolerance across its 47 Member States. Those broad challenges were linked to three direct threats to the Court; the first of which he considered in Part 2. In Part 3 of 5, below, he considers what are the consequences of resource, political and other constraints.

A key criticism of the Court is the length of time it takes for it to issue decisions or judgments and the good faith the Court must place on Member State subsidiarity given the resource and other constraints imposed by those Member States.

It is difficult to deny that the Court has critical constraints imposed on it and that there is an inevitable and inherent conflict of interest between the Court’s desire to faithfully adjudicate, implement and enforce rights of individuals and the fact that the Court’s resources emanate from the States themselves.

That much is also true of domestic court systems and the interplay between the executive and the judiciary. The Court, practically speaking, can only deliver a maximum 1,500 to 2,000 judgments each year which have substantive issues to deal with and are not deemed ‘repetitive’ cases.

The Registry of the Court was clear in panel discussions on 30th November 2018, that the priority policy for full applications has recently been reformulated to allow the Court to better take account of the nature of complaints before it by determining which should wait and which should come first – essentially fast-tracking and streamlining the process. The Registry of the Court in discussions, however, underscored that it does not have unlimited resources, it has a limitation in staff, and only seven judges in each section ‘who are also human beings’. In summary, that translates into substantial time needed for dealing with cases.

What we giveth we taketh back

To compound matters, contributing Member States have started to respond to ‘adverse’ decisions of the Court and ‘unfavourable’ resolutions in the Parliamentary Assembly (often related to human rights issues) by withholding contributions. Adverse and unfavorable, of course, only to perceived State interests as opposed to the interests of the individual petitioning citizen of that State. Russia, for instance, has withheld in its entirety its €33 million contributions to the Council purportedly because the Parliamentary Assembly decided to suspend its voting rights after its illegal (under international law) annexation of the Crimea in 2014. Turkey also reduced its contributions from €34 million to approximately €14 million by becoming an ordinary member and withdrawing extra-budgetary funding – the timing coincided with a number of adverse decisions of the Court, frequent criticism by the Council’s Commissioner of Human Rights and a unequivocal position from the Council, pursuant to its Statute, that re-introducing the death penalty would lead to Turkey’s expulsion from the Council. Both Turkey and Russia have, in turn, threatened to leave the Council after being subject to increased scrutiny over its disregard for accepted human rights norms standards in the Council.

What is the stand of Member States like the UK to this fundamental challenge to a regional institution that, as of 1st January 2017, at least theoretically, provided human rights protection through the Court to 831 million people in 47 countries? Worryingly, in the latest report of the House of Commons, Foreign Affairs Committee, “Global Britain: Human rights and the rule of law”, of 5th September 2018, there was not a single reference to the Court. There was no reference to:

There were, therefore, no specific recommendations for future engagement at a time when the current UK government’s long-term objective is to withdraw from the Convention (see further Part 4).  At the same time, the report concluded that “the UK’s withdrawal from the EU, UK involvement in these mechanisms [i.e. international mechanisms] will become an even more important tool for the UK’s work to promote democracy and the rule of law, strengthening the international rules-based system.”

So where does that leave the democratic liberal European order and the cultural and normative change that membership of the Council of Europe and, in particular, the Court was supposed to engender?

Part 4 will consider the third, and perhaps most critical, practical challenge facing the Court including from founding members like the UK who arguably are, knowingly or unknowingly, assisting the normative failure of international human rights norms. It will assess the presumption that subsidiarity is necessarily a two way process, that judgments of the Court are implemented and, where they are not, that they are adequately enforced by the Court through the Council’s Committee of Ministers (CoM), which is the executive body of foreign ministers representing Member States.