Barbarism Is Beneath Us (Part 2) 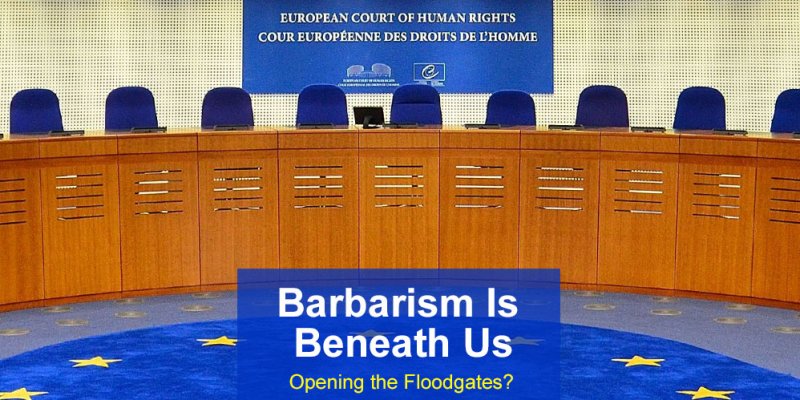 In Part 1 Aarif Abraham introduced the challenges faced by the European Court of Human Rights (Court) with growing authoritarianism, nationalism and intolerance across its 47 Member States. Those broad challenges were linked to three direct threats to the Court. In Part 2 of 5, below, he considers the first of these threats relating to the right of individual petition.

One of the inherent tensions the Court must assuage is between the right of individual petition to the Court (whether a full application or an application for interim measures) and the severe curtailment of Convention rights by governments antithetical to the rule of law.

A key criticism of the Court, in that respect, is that it has severely eroded the right of individual petition as a result of the pressure from States on the Court to:

That erosion seems particularly acute since the rise of authoritarian governments across Europe which have become the source of the vast majority of new applications to the Court. Professor Başak Çali at the panel discussions in Strasbourg, between 29th November and 1st December 2018, termed the erosion of the right of individual petition as ‘negative subsidiarity’ by which she means that the Court has voluntarily acquiesced to shifting the centre of who interprets human rights norms from the rightful domain of the Court to the improper venue of the violating domestic state. Michael O’Boyle’s piece and Lavrysen and Poppelwell-Scevak’s piece on the availability of effective remedies in Turkey, since the 16th July 2016 attempted coup, reinforces this point as does Başak Çali’s piece on the use of excessive legalism by first instance courts in Turkey as a means to immunise themselves from international human rights norms.

A starting point when assessing the proposition that the court has abrogated its duty to consider individual petitions case-by-case is to assess the statistics on the number of applications to the Court and the continuing backlog; both, incidentally, are not readily understandable and the methodology for calculation somewhat nebulous. Official Court figures for 2017 show that 63,350 applications were allocated to a judicial formation. A total of 85,951 applications were disposed of judicially. The number of cases disposed of exceeded those allocated by more than 22,500. As a result, the stock of allocated applications pending before the Court decreased over the year, by 29% from 79,750 to 56,250. That figure reflects the number of current applications that comprise the Court’s backlog – that is significantly reduced from the 160,000 a decade or so ago. As at 31st December 2017, the number of applications pending at a pre-judicial stage stood at 12,600. In 2017, 70,356 applications were declared inadmissible or struck out of the list of cases by a Single Judge, a Committee, a Chamber or a Grand Chamber, a 92% increase compared with 2016 (36,579). Judgments were delivered in respect of 15,595 applications (compared with 1,927 in 2016 – an increase of 709%). A large proportion of these applications were joined, but the number of judgments actually delivered was 1,068, an increase of 8%. The total number of decisions on interim measures was 1,669. The Court granted requests for interim measures in 117 cases and dismissed them in 533 cases. The remainder fell outside the scope of Rule 39 of the Rules of Court.

The 2017 figures in respect of the reduction of the pending applications backlog (from 79,750 to 56,250) reflect three trends: the use of the priority policy introduced in 2009 to address the most serious category of cases first; the declaration of inadmissibility of vast numbers of applications for non-exhaustion of a new domestic remedy (some of which fall within the top three priority policy categories); or the strike out of applications in the context of an on-going pilot procedure. The Court accepts that the challenge of reducing the backlog of non-repetitive Chamber cases/priority cases remains. It remains particularly acute in respect of some countries more than others. The pending applications allocated to a judicial formation as of 30th December 2017 were as follows for the following countries: Romania 9,900 (17.6% of total of 56,250); Russia 7,750 (13.8%); Turkey 7,500 (13.3%); Ukraine 7,100 (12.6%); Italy 4,650 (8.3%); Hungary 3,550 (6.3%). By contrast, 37 other Member States made up 8,650 of all pending applications and only 15.4% of the total.

The divergence in pending applications is related, of course, to the divergence in the number of the applications emanating from the States. On the face of it, the UK, for instance, is an exemplary complier and very few applications are made to the Court; in 2017 the Court received just 511 applications – 506 were declared inadmissible or were struck out and there were five judgments (concerning five applications), two of which found at least one violation of the Convention. Those remarkable figures puts into perspective the huff-and-puff of UK government ministers who have their sights trained on picking off Convention rights from the body of UK law (be repealing the 1998 Human Rights Act).

By contrast, in 2017, there were 31,053 applications concerning Turkey, of which 30,063 were declared inadmissible or struck out. The vast increase in applications was related to the coup attempt of 16th July 2016, the breakdown of the peace-process with the Kurds earlier that year, and issues concerned with the refugee influx from Syria. The Court delivered 116 judgments (concerning 990 applications), 99 of which found at least one violation of the Convention. Again, on the face of it, the dismissal of so many applications appears welcome news – presumably that indicates that a State like Turkey is adequately protecting peoples’ rights?

We must, however, take into account the fudge in the numbers. Under the pilot judgment procedure, pursuant to Rule 61 (3) of the Rules of Court, the Court issues its principal judgment which can enable it to dismiss thousands of underlying applications that are linked to that pilot: the issuance of the Yuriy Nikolayevich Ivanov v Ukraine judgment (Application no 40450/04) in 2009 which remained unimplemented for eight years led the Court in Burmych and others v Ukraine (Applications nos 46852/13 et al), in 2017, to strike out some 12,143 follow-up applications on the basis that it was the responsibility of the CoM to enforce judgments. The Court went further and stated that strike-out would apply also to future applications which relate to non-enforcement of domestic judgments, which estimates (in the Court’s judgment) indicate could be close to some 120,000 cases. Similarly, in the pilot judgment of Köksal v Turkey (Application no 2873/17), relating to summary dismissal of civil servants after the July 2016 attempted coup, the Court found that a domestic remedy was made newly available to applicants in 2017 and proceeded to reject 30,000 linked applications for non-exhaustion (see also Catal v Turkey (Application no 2873/17)).

A case of justice denied?

The use of pilot judgments is understandable given the many cases stemming from structural or systematic problems or otherwise repetitive cases which can be addressed by requiring general measures of the State in one-go; the procedure has been used some 35 times since its introduction. The rejection of follow-up (or linked) cases from the Court’s docket, however, generally kicks the matter into the long-grass; back for determination in violating States with, in some instances, extremely poor rule of law standards. That leaves applicants without recourse to the Court’s jurisdiction and substantive/individual adjudication of the merits of their cases (as much was said by the dissenting judges in Burmych although the dissent in that case, perhaps, went some way in persuading the majority in retaining a right to reopen cases that were struck-out; the same was true of in the cases of Koksal and Catal v Turkey (Application no 2873/17)).

Furthermore, where the violating State has created mechanisms for implementation that are artificial or ineffective the resolution for victims is merely delayed; by decades potentially if the cases are ultimately returned to the Court following exhaustion of these apparent domestic remedies. States like Turkey, Hungary, Russia have systematically regressed in maintaining democratic checks and balances, judicial autonomy, and legislative independence – progress made by Russia in implementing rule of law reforms and the rapid reforms in Turkey during the late 1990 and 2000s have been rolled back. (See Lauri Mälksoo’s post – he ultimately does not regard Russia as having regressed in anyway but considers that Russia is returning to its ‘traditional values’ in the face of liberal and western cultural norms (which include human rights)).

The Bar Human Rights Committee noted recently, at an event with an Article 19 in the House of Commons, that in Turkey, since July 2016: some 402,000 people have been subject to emergency decree-related legal proceedings; 4,560 judges and prosecutors have been summarily removed; over 160 media outlets have been closed down; over 370 NGOs suspended; and some 115,000 teachers and civil servants have been dismissed. The deference accorded by the Court and the CoM to the creation by States of new mechanisms without special guarantees for fair adjudication cannot be correct; placing so much good faith on the part of systematic violators of a group of victim’s rights like Turkey, and where objective observations show the mechanisms are not fit for purpose, is misplaced. These will likely be cases not only of justice delayed but justice denied.

Part 3 will consider the second practical challenge facing the Court, namely; the length of time it takes for it to issue decisions or judgments and the good faith the Court must place on Member State subsidiarity given the resource and other constraints imposed by those Member States.