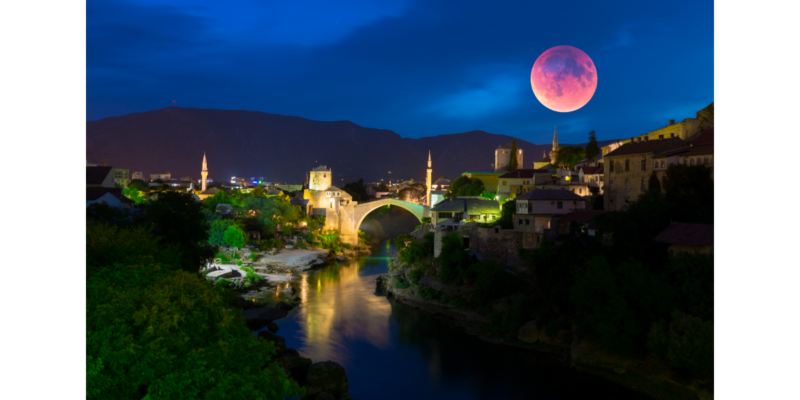 Image: Old Bridge, Mostar, which was rebuilt and restored following the 1992-95 armed conflict in Bosnia-Herzegovina.

On 4 November 2021, Garden Court North Chambers, in association with the University of Manchester, the Coalition for Genocide Response and Accountability Unit, held the next ‘OUT-LINES’ webinar on international law on existential risks to Bosnia-Herzegovina. The webinar video recording is now available to view (below) or here (directly on YouTube).

Bosnia-Herzegovina re-emerged as a State following armed conflict in 1995; a conflict that saw the commission of genocide for the first time in Europe since the Second World War and pitted its three ethnic majorities against one another despite a history of shared living. The peace agreement at Dayton, Ohio helped end the violent conflict, but its imposed constitutional settlement froze the conflict rather than address its underlying causes. Today, Bosnia faces existential risks: renewed violent conflict encouraged by extreme-nationalists and predatory neighbours, endemic corruption among elites, severe political and economic stagnation exacerbated by ethno-nationalism, and little to no political legitimacy of elites representing the people. Reform, which ought to be driven by inclusivity, necessity and a human rights-led approach, remains elusive. Why has institutional conflict remained persistent? What can be done to achieve a durable peace and avert existential risks? And what might a vision for an inclusive and participatory Bosnian constitution look like?

Sir Geoffrey Nice QC has practised as a barrister since 1971.  He worked at the International Criminal Tribunal for the Former Yugoslavia – the ICTY – between 1998 and 2006 and led the prosecution of Slobodan Milošević, former President of Serbia. Much of his work since has been connected to cases before the permanent International Criminal Court – Sudan, Kenya, Libya – or pro bono for victims groups – Iran, Burma, North Korea – whose cases cannot get to any international court.  He works for several related NGO’s and lectures and commentates in the media in various countries on international war crimes issues. He has also been a part-time judge since 1984 sitting at the Old Bailey and has sat as judge in other jurisdictions, tribunals and inquiries. Between 2009 and 2012 he was Vice-Chair of the Bar Standards Board, the body that regulates barristers. Sir Geoffrey was the Chair of the China Tribunal examining allegations of Forced Organ Harvesting in China and is the current Chair of the Uyghur Tribunal which is examining allegations of genocide and crimes against humanity being committed against the Uyghurs and other Turkic minorities in Western China.

Valery Perry worked in the Western Balkans since the late 1990s, conducting research and working for organizations including the Democratization Policy Council (DPC), the European Center for Minority Issues (ECMI), the Public International Law and Policy Group (PILPG), the NATO Stabilization Force (SFOR), and several NGOs and the OSCE Mission to Bosnia and Herzegovina in Sarajevo as Deputy Director of the Education Department, and Deputy Director of the Human Dimension Department. She has consulted for the UN Office on Drugs and Crime, the UN Development Program, the Regional Cooperation Council, USAID, IMPAQ International, and other organizations. She received a BA from the University of Rochester, an MA from Indiana University’s Russian and East European Institute, and a PhD from George Mason University’s Institute for Conflict Analysis and Resolution. Valery has published numerous articles and book chapters, has spoken at conferences and policy events in the United States and throughout Europe, and has testified at the U.S. Congress.

Amna Popovac graduated from the Faculty of Electrotechnical Engineering and Naval Architecture in Split, Croatia. She was educated in post-graduate programs in Management and IT (MIT, Sarajevo) and Finance (Dayton, Ohio). She is the President of the Board of JU Djeciji Vrtici Ciciban Mostar, a kindergarten in Mostar, BiH, as well as President of the Board of the Los Rosales Center for Children and Youth with Special Needs in Mostar. Popovac is a member of the Board of the Association of Private Electronic Media in BiH (PEM) and one of the founders of the Association of Businesswomen in BiH – ONE. She has been the owner of radio station Studio 88 since 1998, which she launched to contribute to the normalization of life in Mostar, Herzegovina, and BiH. From the very beginning to today, members of all constitutive peoples of BiH have worked at Studio 88, which makes it unique in Herzegovina. In April 2011, she produced the documentary “Santiceva 88” with Federal Television which discusses the senselessness of war especially in those places where Studio 88 had one of the main roles. In addition to this, Amna Popovac has worked for international organizations in BiH, such as the European Union Administration of Mostar (1996-1998), Scottish European Aid (1998-1999), and the Office of the High Representative (1999-2006).

Iva Vukušić is a lecturer at the Centre for Conflict Studies at Utrecht University in the Netherlands. She holds a PhD from the History Department of Utrecht University, where she defended her dissertation on paramilitaries during the breakup of Yugoslavia. She was affiliated with NIOD, the Institute for War, Holocaust and Genocide Studies in Amsterdam and is now visiting fellow at King’s College London, War Studies Department. From 2009 to 2015 Iva worked for the Sense News Agency in The Hague, covering trials at the International Criminal Tribunal for the former Yugoslavia (ICTY). Before that, she was an analyst and researcher at the Special War Crimes Department of the State Prosecutor’s office in Sarajevo. Her research focuses on irregular armed forces, mass violence and judicial efforts to achieve accountability.

Azra Zornić is a citizen of Bosnia and Herzegovina (BiH). She is a retired professor of sociology. From 2004 to 2017, she worked in the Constitutional Court of Bosnia and Herzegovina. She previously worked at the Human Rights Chamber for Bosnia and Herzegovina from 1999 to 2004, and prior to that in the U.N. Refugee Agency’s (UNHCR’s) Office of the Special Envoy for the former Yugoslavia from 1994 to 1999. In December 2005, she submitted her appeal against Bosnia and Herzegovina to the European Court of Human Rights in Strasbourg. Her claim was that the Constitution discriminated against the equal rights of citizens who do not want to affiliate or identify with any ethno nationalist group (Bosniak, Serb or Croat) but rather prefer to identify only as Bosnians, citizens of Bosnia and Herzegovina. On July 15, 2014, the European Court of Human Rights ruled in her favor. The Heilrich Boll Stiftung’s in its publication “25 Years After Dayton” published her interview with Buka Magazine entitled “Until My Ruling is Enforced, Cerberus – The Three-Headed Dog of Greek Myth – Will Occupy the BH Presidency!“ On October 5, 2021 Just Security published her article Human Rights Plaintiff: US-EU Election Plan for Bosnia Rewards Nationalist Agendas.

Bojan Šošić is a psychologist with vast experience in reforming mental health services and especially supporting mental health service users’ initiatives, and mental health challenges related to migration. As a researcher, he has acted as principal investigator in studies conducted across Bosnia and Herzegovina and South-East Europe, with samples totalling several thousands of individuals, using biological, psychological or socio-economic indicators. He contributed to setting up a number of studies or psycho-social aid programmes in the field of mental health, quality of life and well-being, education and determinants of socioeconomic status, including programmes conceived after the 2004 Indian Ocean earthquake and tsunami. He is on the Board of the Academy of Sciences and Arts of Bosnia and Herzegovina.

Aarif Abraham is a barrister at Garden Court North Chambers specialising in public international law, international criminal law and human rights. He advises policy makers, NGOs and international organisations widely on constitutional issues as well as foreign policy matters. He is the founder of Accountability Unit. Aarif is the author of A Constitution of the People and How to Achieve It (forthcoming, 28 May 2021, CUP) which considers how people can have a greater say in how they are governed. It compares the processes behind the creation of the British and Bosnian constitutions and how both countries might have more inclusive, participatory and deliberative constitutional reform processes.