Asylum seekers on Samos – A report by Vijay Jagadesham 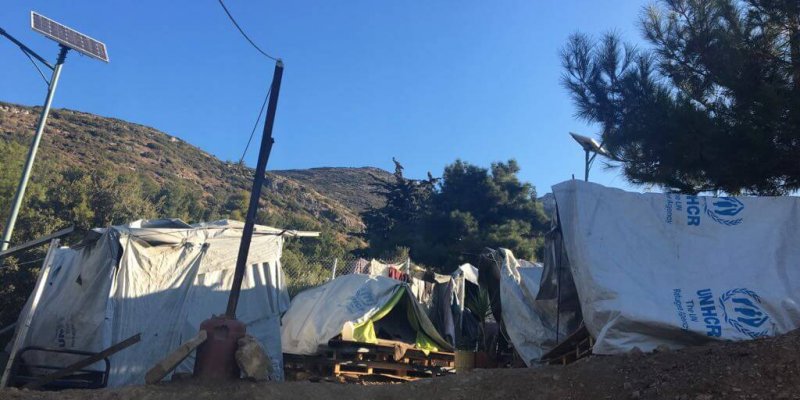 Over the course of a couple of weeks in late September and early October 2017, Lucy Mair and I embarked on our third trip to Greece in the past year, in order to provide legal advice and assistance to asylum seekers arriving on the island of Samos. We had been warned about the deterioration in conditions since we had been in January including severe overcrowding. We observed first hand the terrible conditions in which those fleeing countries such as Syria, Iraq and Afghanistan now find themselves, having supposedly reached a safe place. NGOs on the ground have issued stark warnings, but still the Greek and European authorities display little sign of taking any meaningful action to improve conditions.

Added to all of this is the reality that apart from a handful of dedicated Greek lawyers, there is no legal advice and assistance available on Samos for refugees, who face having to make their claims for international protection on their own. Many Syrians are unable to claim asylum in Greece following an undoubtedly unlawful agreement between the EU and Turkey, whereby Syrians now have to justify why they should not be returned to Turkey – which purports to offer “temporary protection” to Syrians, but where international human rights organisations are unanimous about the poor conditions they face there and the risks of forcible return to their home country. All the Syrians we met spoke about the hardships they had faced in Turkey – from being shot at while trying to cross the border from Syria to Turkey, to being unable to lawfully register as refugees in Turkey and thus being denied medical care and other services, to being forced to work illegally and thus being exploited for their labour in circumstances where they could not report or complain about their conditions.

On Samos word quickly spread that two volunteer lawyers had arrived and we were quickly inundated with cases. We worked out of “Alpha”, a community centre that has been created by the amazing grassroots organisation, Samos Volunteers, which is entirely run by volunteers and is solely reliant on donations. Whilst we interviewed individuals about their past, took detailed witness statements and prepared legal submissions, in other rooms refugees were being taught English, German, Greek. Children would run to different classes. Women had a safe space to learn in the women’s only area. We set up legal information sessions so that we could provide advice to a greater number of people, with Lucy providing an all-female session using three different interpreters so that as many women as possible could attend. We gave advice about what people could expect as part of the process they now found themselves in, the kinds of questions they might be asked in interview and the likelihood of delays. They listened intently, asking questions and contributing their own experiences. It was evident to us how much it meant to them just to have this time, to be able to speak to a lawyer and to have someone listen to them.

We always leave wishing we could have done more, that we could do more. But we left knowing that we had been able to do meaningful work on important cases, involving severe domestic violence, torture, and highly vulnerable individuals. We were delighted to hear of positive outcomes in some of our cases before we left. We continue to work on cases whilst we are in the UK, and I will be representing one of the individuals I met on Samos at an appeal hearing in London at the beginning of November, on a pro bono basis.

We want to say a big thank you to everyone who made a donation in support of our trip. We were able to cover our expenses on this trip and, with additional money that we raised, plus money that we personally donated, we were able to give Samos Volunteers a donation of €1,000. We intend to go back and we will let you know when we do.